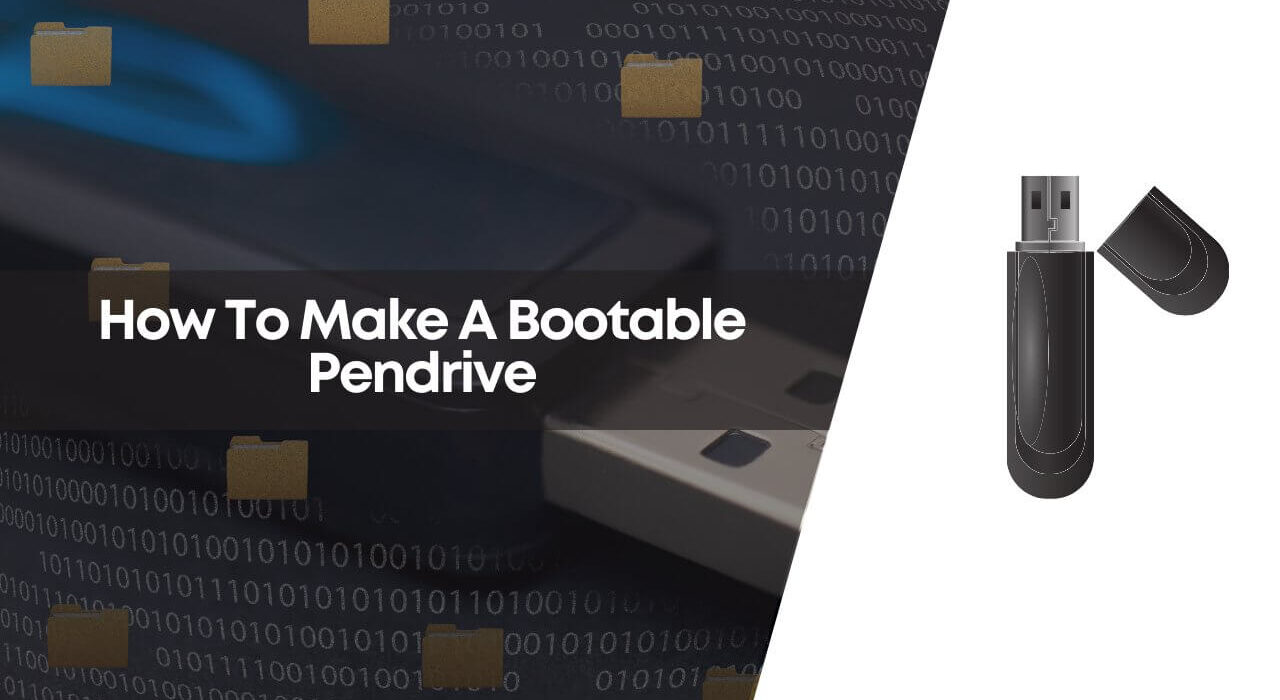 There was a time when we used to use CD or DVD to install Windows in our system. But times are changing, now we use flash drives instead of CDs or DVDs. Now you must be wondering: how to make a bootable USB flash drive for this? Many people find this job very difficult, so they go to a computer store or a computer specialist. The cost of installing Windows System Format is Rs 200 to Rs 300. And if I say that now you will not need to pay money, and you can easily do this work yourself.

Yes guys, I’m not lying. Making a USB stick bootable is easy. So today I thought why not you provide complete information about how to make Pendrive bootable, so that you do not have any problem with it, and therefore you will not have to depend on anyone to do it. So let’s get started right away and take a closer look at how to make a bootable USB stick.

When we start our computer, there are some operations that our computer automatically starts doing. These functions are called downloads. During the boot process, the system checks all hardware and software to see if they are installed correctly, whether they are connected correctly or not. They also download all the necessary files in the system.

In this boot process, all the files stored in the ROM chip are loaded for the system to function properly. In addition, the system reads all the information from the files that are installed in the ROM chip. After booting, the system automatically displays all the information. If you want to know the details of the download process, then you must read the following paragraph carefully where I tried to explain the whole process.

Well, there are basically two types of boots: Warm boot and cold boot.

Warm boot is usually initiated by the operating system itself, not by turning on the power button on the computer. For example, to Warm boot Windows, you need to select the Restart option from the Start menu.

Warm booting (which actually means restarting the computer) is much more common than cold booting as most users prefer to put their computer in sleep mode when they are not using it. By the way, power-on self-test (POST) is not used in warm boot as it is in cold boot, but in this case the rest of the boot sequence is performed.

Both hot and cold boot flush the system RAM and execute the boot sequence from scratch. But unlike cold boot, hot boot all system caches may or may not be cleared, these caches store temporary information. In addition, a Power On Self Test (POST) is performed on cold boot, in which a series of system checks are performed from the beginning of the boot sequence.

Although both hot and cold reboots are similar, a cold boot completely resets the system compared to a hot reboot. Therefore, a “cold” boot or a complete shutdown is preferred when troubleshooting a computer.

Why Bootable Pen drive is required?

Your operating system (Windows / Linux / Mac) is always stored on your hard drive / SSD along with other configurations. These operating systems do not run from the hard drive itself because secondary storage devices are slow. Therefore, the OS (which is actually a program) is loaded into the main memory (RAM), which is much faster and much easier to perform all kinds of tasks with the CPU. to complete.

As a result, when the OS is loaded, it is loaded into the main memory (it is the kernel that is an integral part of the OS).

When you start the system, the first thing that starts is the BIOS (in which you will see the manufacturer’s logo). It is the BIOS (Basic Input/Output System) that loads a small program called the bootloader from a special location on your hard drive (which people call the MBR/boot partition).

It is the bootloader that is responsible for loading the kernel and main processes, which then gradually loads all the minor and major processes, and you are taken to a login screen where there are several processes running in the background. were launched.

How to make Pen drive bootable?

It is known to all that CD / DVD is no longer in trend, that’s how it left the market. Most users try to install Windows from their flash drives. But for this to install Windows, first the pen drive must be bootable on the system. As easy as it sounds, it is easier to do. You can easily install Windows on your laptop or desktop using a bootable USB drive. But often people do not know how to make Pendrive bootable? To solve this problem, I will tell you two simple ways by which you can create bootable flash drive very easily. There are two ways:-

Before creating any bootable USB drive, we will need the Windows ISO file that you want to install on your system. So keep the ISO file with you first.

Step 2. Insert your pendrive and download Rufus File together.

Step 4. Then click “Start” and wait for this process to complete. This process takes a few minutes to copy all ISO files to a USB flash drive.
Once the whole process is completed correctly, your flash drive will be ready to install Windows. Q) Will my data lost while making pen drive bootable?
A) Yes, Keep a copy of your pen drive data some where else.

How to delete browser history on Phone and Desktop